If you are in the northeast corner of Haig Point on Daufuskie Island, you may see a 90-foot, red and white tower across the water. 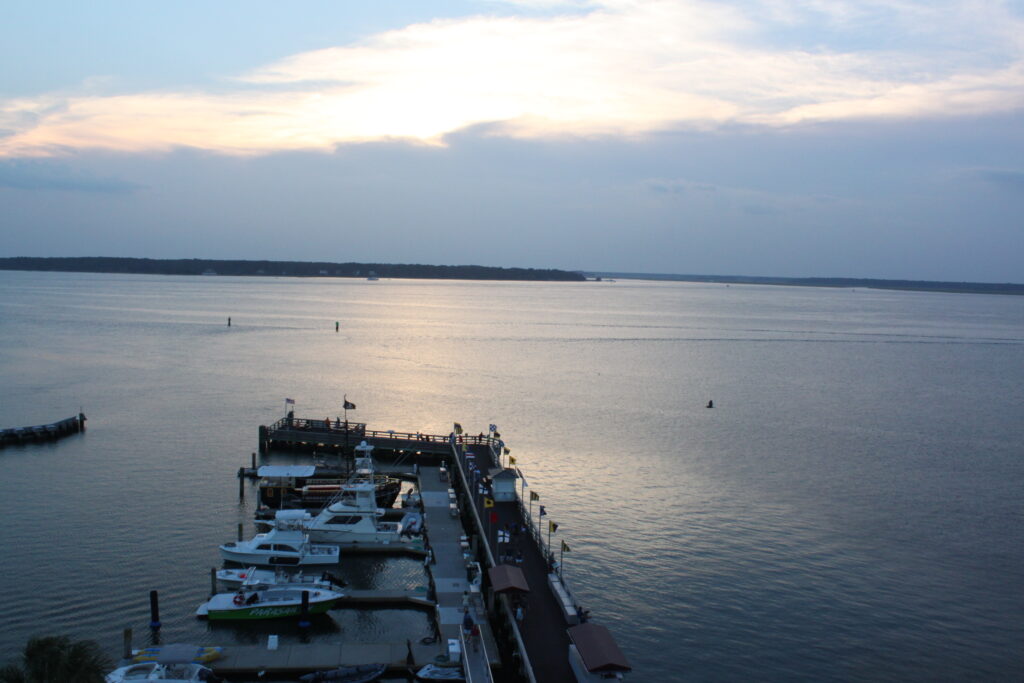 It’s the Harbour Town Lighthouse! This candy-cane colored structure lies in the heart of Sea Pines, a resort community on neighboring Hilton Head. There is no better place to witness an aerial view of Daufuskie and Hilton Head Islands than its top.

The Harbour Town Lighthouse was completed in 1970. It was the first privately-financed lighthouse built since the early 1800s. It was nicknamed “Fraser’s Folly,” after Charles Fraser, the visionary developer of The Sea Pines Resort. He believed a distinctive landmark, along with a pro­fessional golf tournament, would arouse interest in the fledgling seaside community. As usual, Fraser was right, and today the candy-striped, hexagonal structure has become synonymous with Hilton Head Island.

The lighthouse is been open to the public, and you can visit it any day of the week between 10 a.m. to sundown.

There are 114 steps to the top of the lighthouse. On the way up, you can stop to look at many of the historical relics and photos on the walls. These vestiges make up what is considered the Harbour Town Lighthouse Museum. The stairs within the lighthouse are actually taking a self-guided tour of the museum.

Some of the relics in the Harbour Town Lighthouse Museum include photographs from the Civil War era. There are also artifacts from as early as 3000 BC, and many other items that display the rich history of Hilton Head. It costs $5.75 per person per person to climb to the top of the lighthouse.

And there is much more to do after you make that climb to the top and come back down.

If you are interested in visiting the Harbour Town Lighthouse from Daufuskie, H20 Sports offers the areas quickest ferry service. Their Ferry Water Shuttle takes approximately 20 minutes and drops you off at the Harbour Town Marina, where the Lighthouse is situated. So take that short jaunt over for a day trip. You won’t be disappointed.