Search
HomeBlog ActivitiesJellyfish In Our Waters

Every year, hundreds of thousands of jellyfish pass through our waters. 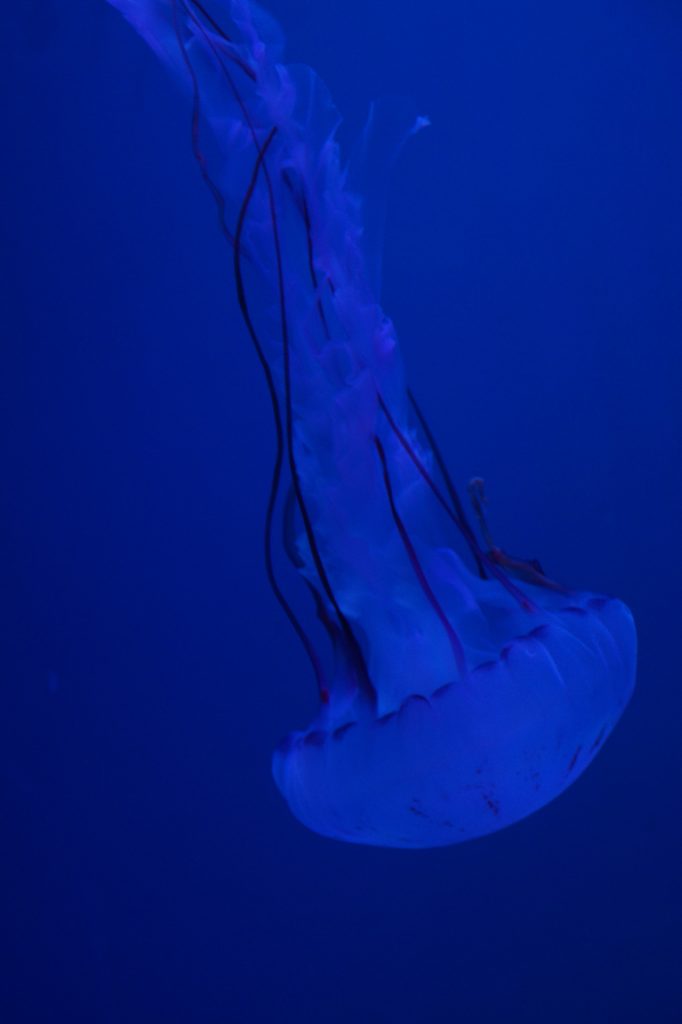 Most jellyfish along the South Carolina coast are harmless, but in the months of August and September we get some warm water visitors than can ruin a perfect beach day. Sea Nettles are the most common stinging jellies found in our late summer waters.

They have a rudimentary nervous system with receptors that detect sunlight, odors and other stimuli. Jellyfish have radial symmetry. This means that all of their body parts radiate from a single axis. This genetic design allows them to respond to stimuli from any direction.

These animals rely on ocean currents, tides and winds as their main transportation. At the same time, they are able to swim in a vertical motion. Jellyfish contract their bell-shaped heads to move up and down in the water column as they search for food or move towards sunlight. Although many people may think that jellyfish attack on purpose, these animals react reflexively to contact and do not intend to cause humans any harm.

They typically have four to eight tentacles that dangle below the bell and transport food from the tentacles to the mouth. These tentacles are coated with cnidocytes, venom-filled capsules with tiny barbs that inject toxins into prey, immobilizing them. Jellyfish are carnivores eating zooplankton, other jellyfish, small fish and even crustaceans.

Sea nettle stings are not something anyone wants to go through.

Their tentacles contain both a trigger and a stinging structure. While floating through our waters, their tentacles will come into contact with something solid, which stimulates the trigger releasing tiny barbs full of toxin. The severity of a sting will depend on a number of factors: the thickness of the skin in contact, the penetrating power of the barbs and the sensitivity of the victim to the toxins.

If stung by a jellyfish, the first thing to do is remove the barbs. Barbs that are not removed will continue to release toxins into the body. Baking soda may also be used. The notion that urine will help aid a jellyfish sting is a myth; in fact, urine may stimulate the barbs to fire more toxins. Once the toxins have been neutralized, using topical Benadryl or calamine lotion will ease the itch that follows a sting.

Tentacles sting whether they are attached to the sea nettle’s body or not.

Tentacles and pieces of tentacles can wash up with sea grasses and other ocean debris onto the beaches, so take caution during the heavy jellyfish season.

The best way to avoid Sea Nettle stings would be to avoid entering the water during migrating season. However, for those of us who can’t stay out of the ocean, wearing wetsuits or rash guards or even panty hose in the water will help to prevent jellyfish stings.