Sand Dollars are the creeping, cunning and cloning creatures of the oceans. 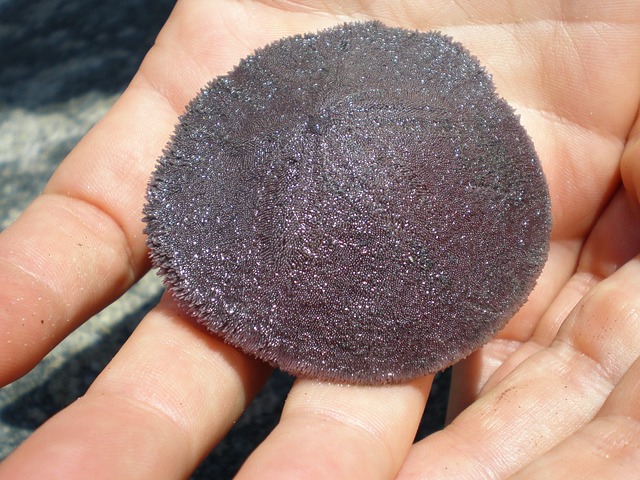 The test consists of calcium carbonate plates arranged in a fivefold symmetric pattern. The test of certain species of sand dollar have slits called lunules that can help the animal stay embedded in the sand to stop it from being swept away by an ocean wave or tide.

In living individuals, the test is covered by a skin of velvet-textured spines which are covered with very small hairs (cilia). Coordinated movements of the spines enable sand dollars to creep across the seabed. The velvety spines of live sand dollars appear in a variety of colors—green, blue, violet, or purple—depending on the species.

The bodies of adult sand dollars, like those of other echinoids, display radial symmetry.

The petal-like pattern in sand dollars consists of five paired rows of pores. The pores are perforations in the endoskeleton through which podia for gas exchange project from the body.

The mouth of the sand dollar is located on the bottom of its body at the center of the petal-like pattern. Unlike other urchins, their bodies also display secondary front-to-back bilateral symmetry. The anus of sand dollars is located at the back rather than at the top as in most urchins. These result from the adaptation of sand dollars, in the course of their evolution, from creatures that originally lived their lives on top of the seabed (epibenthos) to creatures that burrow beneath it (endobenthos).

In 2008, biologists discovered that sand dollar larvae will clone themselves for a few different reasons.

When a predator is near, certain species of sand dollar larvae will split themselves in half in a process they use to asexually clone themselves when sensing danger. The cloning process can take up to 24 hours and creates larvae that are 2/3 smaller than their original size which can help conceal them from the predator.

Sand dollars will also clone themselves during normal asexual reproduction.

Larvae will undergo this process when food is plentiful or temperature conditions are optimal. Cloning may also occur to make use of the tissues that are normally lost during metamorphosis.

The flattened test of the sand dollar allows it to burrow into the sand and remain hidden from sight from potential predators. Predators prey on sand dollars even through their tough exterior. When a sand dollar dies, it loses the spines and becomes smooth as the exoskeleton is then exposed.