In ancient Egypt the ibis is associated with Thoth, the god of wisdom, the written word and knowledge. 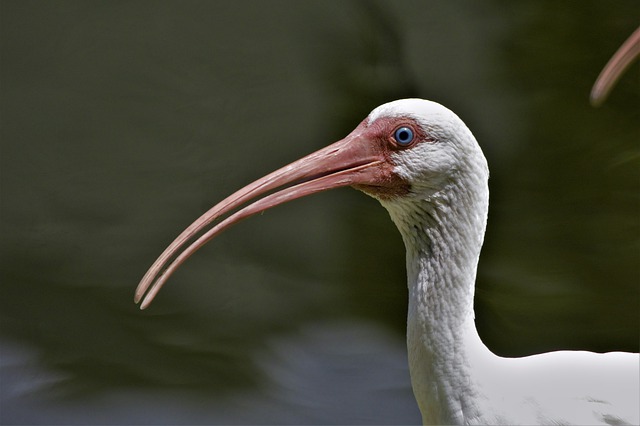 These birds were important indicators of the oncoming flood and fertile time for the Nile River Valley. Although times have changed, the ibis are still excellent indicators of a healthy environment in our beautiful Lowcountry.

The white ibis, Eudocimus albus, is a common sight on our coastal waterways and freshly cut golf courses. They can be viewed in large numbers, foraging for food, roosting in trees or soaring through our Lowcountry skies. The white ibis can be most easily identified by its all-white body. It has a long, down-curved red bill and long red legs.

Adult ibis will have black wing tips, which can be observed when in flight. Juveniles tend to flock with other adults or large groups of other juveniles. They tend to be dark in color, but still have the apparent down-curved bill. Ibis are mid-sized wading birds with a wingspan of approximately three feet. The longest living ibis was in captivity and lived to be 27 years old.

Ibis can be found throughout the coastal areas of northern South America through the Caribbean and North America to the Carolinas.

They tend to stay along the coastal areas, especially when breeding, and prefer shallow coastal marshes, wetlands and mangrove swamps. They can also be found in flooded fields or in generally moist environments. The depth of the water in an area significantly affects the population of ibis. Their feeding habits tend towards water in which can they wade. They look for food in large groups, either in the water or on moist grassy environments. Using their sense of touch as the primary hunting method, ibis probe the ground for crustaceans, mollusks, fish, insects, small reptiles and other aquatic organisms with their beaks.

Ibis create large colonies once a year during their breeding season.

They will flock to healthy and abundant foraging habitats beginning in March. Females begin the breeding season by displaying their fertility through dance to the males. After copulation, the female will choose a site and begin building her nest. The male will help by bringing twigs and vegetation. Ibis will lay up to four eggs and incubate them for up to 21 days. The female does the majority of the incubating, while the male brings her food and aggressively defends the nest from any other intruders. Once the chicks hatch, they are very weak and vulnerable. One parent will sit and warm the young while the other half of the pair finds food and fresh water. Chicks will leave the nest after about two weeks. The young will become more independent and will tend to flock together in large groups.

H20 Sports, located in Harbour Town Marina, offers the best experience you can have on the water for all ages. For information, visit www.H2OSports.com.