The American Oystercatcher is a very easy bird to identify. 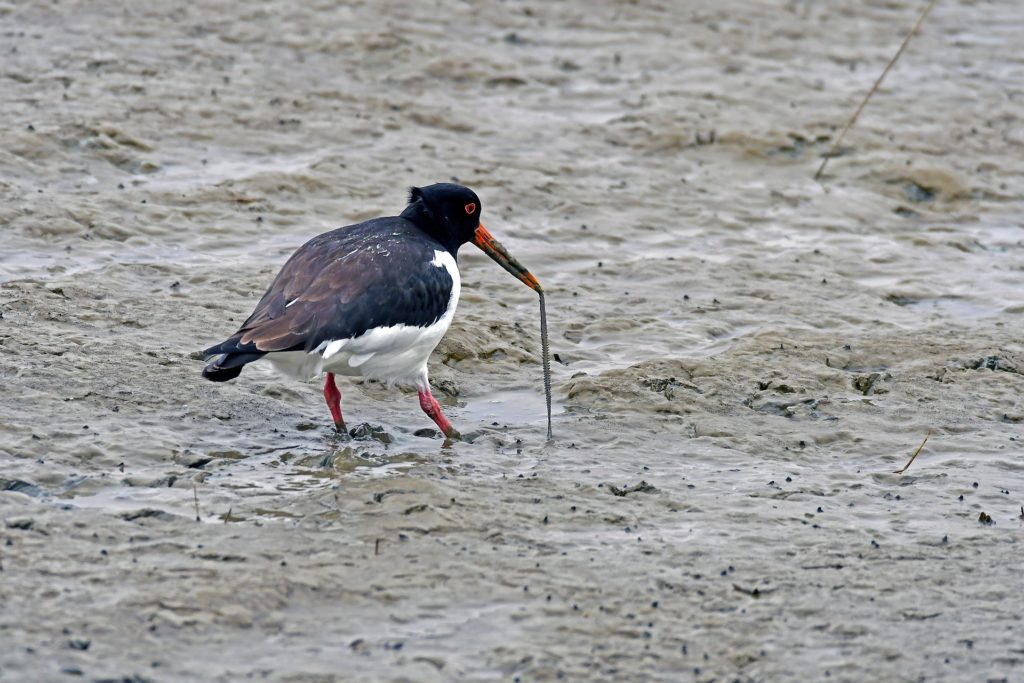 It is the largest species of wading bird, usually found hanging around with the diminutive Ruddy Turnstone, Plovers and Willets. Its body is black on top and white underneath, with an eye-catching contrast of colors on its wings. But its most noticeable feature is its large and pointed, bright orange-red beak. The oystercatcher also has noticeable orange eyes, which, like its beak, contrast with its black head.

Oystercatchers are probing shore birds, and prey on bivalves and worms.

At low tide, they survey oyster beds looking for partially opened shells. In one swift movement they jam their impressive beak into the shell and disable the muscle that closes the shell. They then enjoy the gooey insides of the animal. This technique requires some skill, and if they don’t manage to disable the muscle in time, the oyster can close on the beak and hold the bird captive.

Incoming tides can then drown the trapped bird. Here in the Lowcountry, our large tidal swings are ideal for oystercatchers to hunt bivalves that live in the intertidal zone.

Territory is the number one behavioral concern for the oystercatcher.

They usually begin to breed at four years old, but start to stake out their breeding territory a year prior. Upon reaching sexual maturity, they find a mate and stake their claim on a particular territory – usually a beach, sandbar or shell bank close to an oysterbed. When spring comes the pair create several potential nest sites, which are shallow depressions in the ground.

Together they choose the most appropriate site and pad it with organic matter. The female lays up to four speckled eggs and both parents incubate the eggs for about 39 days. Once hatched, the parents use the proximate oyster bed to provide food for the young.

While adult oystercatchers have virtually no predators, eggs and juveniles are exposed to a number of dangers.

Their ground nests are susceptible to being washed away, driven over or stepped on by animals and humans. Foxes, raccoons and cats target the young birds. Those that survive the first summer travel with one of their parents to roosting grounds in the fall.

Our local oystercatchers do not travel far for winter. They usually go slightly further inland and live in denser groups. However, those oystercatchers that live north of South Carolina migrate south each fall. They do not generally migrate in groups; rather each bird chooses their own path, with family groups and couples often parting ways.