Want to get to Daufuskie Island?

Well, you are going to have to take a water route. There is no bridge to the Island, and few cars are allowed. Everything that gets to Daufuskie is transported by private boat, ferry or barge. For visitors and most locals, a ferry is the best option.

If you look at a map of Daufuskie Island and its proximity to Hilton Head, it looks like the distance is just a stone’s throw away. 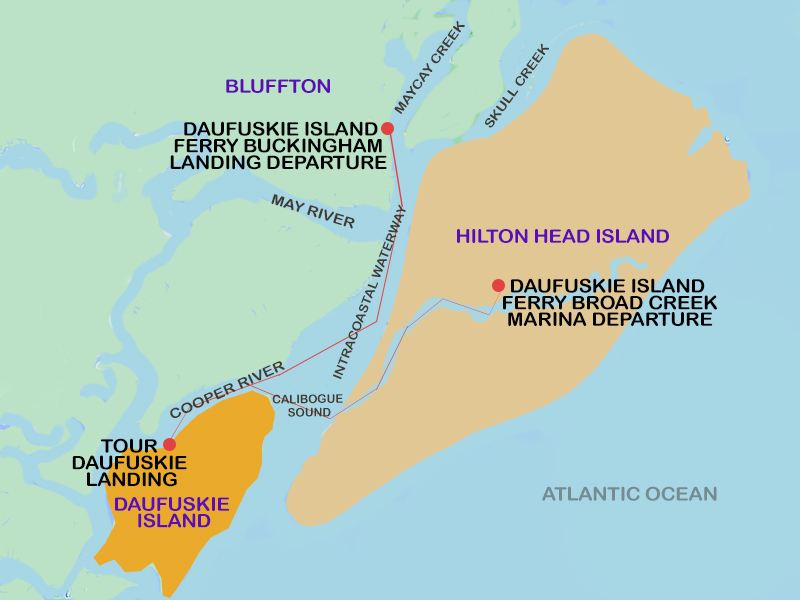 The southern tip of Sea Pines at South Beach is about a half of a mile from Daufuskie. So, why do the ferries leave from other marinas, from Broad Creek and even Bluffton? It has to do with the waterways and our powerful tides. The ferries take the Intracoastal Waterway. This tract runs up and down the Eastern Seaboard running an inland, parallel path to the Atlantic Ocean. The Intracoastal is protected from strong winds and waves.

Yet, in order to get there, you have to pass over the Calibogue Sound. This body of water is much larger than the creeks and rivers along the trip. It can be a little of a rough ride. A ferry provides an enclosed, sturdy vessel with witch to get to Daufuskie.

Much of the route is in a no wake zone, meaning the ferry travels at such a speed that it leaves no white caps, or wake behind it.

Thus, the trip is slow. It is a 45-minute trip from Buckingham Landing, which is just past the bridge to Hilton Head in Bluffton. From Broad Creek Marina, the trip is about 30 minutes. But, hey, who is in a rush. In fact, Daufuskie Island is known for a relaxed atmosphere and time is not of the essence. So before you actually step foot there, enjoy the ride and see both Hilton Head and Daufuskie from water perspective.

You’ll pass by Bluffton’s adored May River. Stroll by the palatial homes of Spanish Wells. Travel under the Cross Island Parkway. And see dolphins in the Calibogue Sound. So relax, enjoy the ride and enjoy your stay!