Despite its fearsome appearance and aggressive nature, the blue crab is greatly cherished in the Lowcountry. 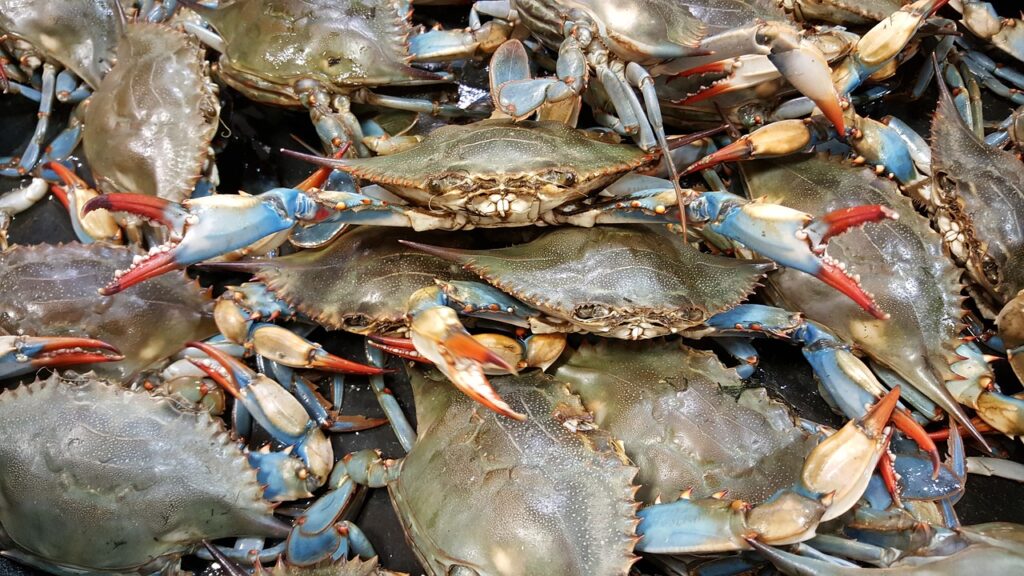 Large males, called Jimmies by fishermen, have brilliant blue claws and legs. The mature females, or “sooks,” have bright orange tips on their claws. Males grow larger than females and have a T-shaped abdomen. The immature female has a triangle shaped abdomen tightly sealed against the body. The mature female’s abdomen becomes rounded and can be easily pulled away from the body after the final molt.

Blue crabs have five pairs of legs and can walk as well as swim.

Three pairs of thin walking legs propel blue crabs sideways. They swim by sculling the oar-like fifth pair of legs, the swimming legs. These legs usually rotate at 20 to 40 revolutions per minute, but they quickly disappear into a blur as the animal darts away.

Blue crabs, like all other arthropods, must periodically shed their hard exoskeletons in order to grow. The smallest crabs shed every three to five days, juvenile crabs every 10 to 14 days and those three inches and larger every 20 to 50 days. Five to ten days before molting, a narrow white line appears just within the thin margin of the last two joints of the swimming legs.

A few days before shedding, these “peeler” crab’s narrow white lines give way to a red line, and fine white wrinkles appear on the blue skin between the wrist and upper arm. Molting lasts for only a few minutes as the crab pushes out the rear of the old shell.

The resulting soft crab, limp and wrinkled, swells to normal shape and usually increases in size by 25 to 35%. If disturbed, the vulnerable soft shell crab can swim and walk but prefers seclusion. After a few hours, the crab’s shell becomes parchment-like and hardens within two or three days.

Once thought to be unlimited, blue crab populations have declined rapidly in recent decades.

This is due in part to over-harvesting. More and more South Carolina fishermen now practice tag and release, which not only conserves resources but also provides information on growth and movement of fish.