Daufuskie has many different mammals that love island living. 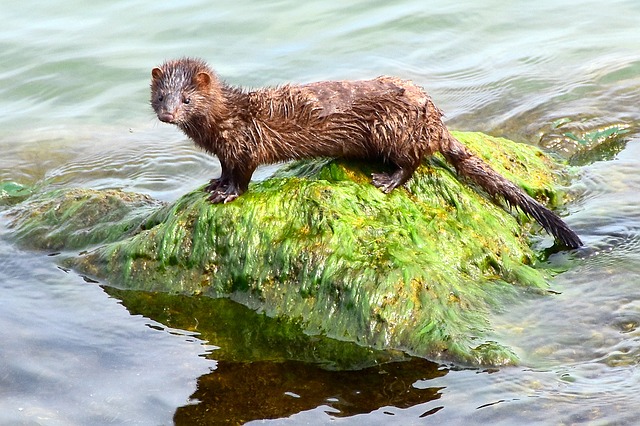 The mink is one that is rarely seen. This elusive animal lives in our salt marshes. Mostly seen during low tides, mink swim and scurry to the water line to catch fish.

Mink populations in the state of South Carolina are significantly higher in the coastal marshes. They are well adapted to our environment and can dive in the water up to 20-feet deep and swim underwater for  100 feet. On Daufuskie, we usually see them swimming on the surface with their faces sticking out just above the water.

They have short stocky legs, not reaching more than four inches tall, but they can get up to lengths of up to four feet long. Males tend to be larger than females, getting up to about four pounds. They have dark brown pelts, with occasional white patches on their neck or belly. They have very strong scent glands and produce a strong must, similar to other species in the weasel family.

Mink live by the water, inhabiting salt marshes, rivers, swamps and small wooded streams. They create dens in root systems, rock outcrops along streams and b side holes. Males may create multiple den sites within their mile territory range while females tend to have one den and don’t travel as far as males. In our saltwater marshes, they create dens among the spartina roots in areas that stay above the high tide line.

Crabs, shrimp, snails and shellfish fill their diet as well. Like many animals in our marsh systems, they take advantage of dolphin strand feeding. As dolphins push schools of fish onto marsh flats, the mink can be seen running toward the water line to catch spare fish left stranded by the dolphin. Minks are mostly known to be nocturnal throughout the U.S. However, in our coastal area they can commonly be seen during daylight hours.

These animals have shown a decline in our area since the 1950s.

Mink have very few predators, which includes other mammals and predatory birds. Development of their marsh habitat and water pollution are the main causes of their decline. South Carolina allows hunting of mink, which is done for their pelts. Although they are hunted, this is not the reason for their decline. South Carolina has strict laws on where and how many mink are allowed to be hunted in a season. Most mink pelts sold today are from ranch-raised mink, thus there has been a significant decline in trapping wild mink across the U.S.